This semester I dont have classes on friday, so I have three days weekend every week... :D But I hadn't do so many things in just one weekend as this one. Thursday night I did a presentation about Colombia in the Universal Festival at my university, dancing included. :p I was really nervous of dancing alone in front of everyone but there was not so many people and I just followed the music... Dancing is definitely great! 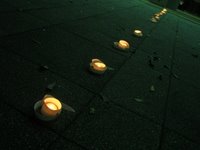 After finishing the presentation we had some cultural exchange with the people who had come to see the festival, and I was asked by two or three cultural exchange group if I would be willing to talk about my country in an event organized by them... so, you cannot say no just like that, so just gave them my email, and hopefully they won't write me, or I'll have to get busy for the time they tell me to do it... jaja just kidding, but yeah, it is not so nice if you have to talk about your country all by yourself. 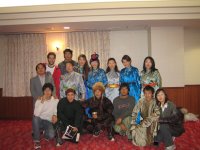 After that we waited for everyone to finish changing and all, and after a long wait and hungry, we went with Madoka, Andrew, Hui (You? Andrew wrote "you" but I call him Hui... so dont know :s), and an Indonesian (Dera), to an Indian restaurant next to the university. It was my second time there, my first time being the first or second day I was here in Chiba... How many time has passed since I came here... ... ... so many people has come, and go... not really getting to know all of them very well, but anyhow, missing them. I had this Curry rice, or something like that, really nice with nuts, uvas pasas, and vegetables in it, and had a really nice time chatting. It is definitely nice to eat with someone, enjoying your food, chatting, and laughing. I guess I dont usually do it here in Matsudo with my classmates, so its really nice when I get the chance to.

Anyway... this will be a long post I guess.
On Friday, I was meeting Jane, an Australian girl I met through "Hospitality Club" and who is travelling around Japan during this holydays. We had have some nice chats by email, and I was really looking forward to meet her and talk to her. We walked from Nippori, all through Yanak-reien (a really nice and quiet cemetery), and then to Ueno park (I just figured out most foreigners will visit Shibuya, Shinjuku, etc... so wanted to show her some quiets places in Tokyo), and then we went to Kinshicho to "It's Vegetable", one of my favorite restaurants here ('cause it has Taiwanese veggie food buffet lunch for ¥980). After that we went to Ginza, to see some Kabuki, because she had seen it on TV and kind of liked her, so we bought some tickets for just two scenes. It was much more interesting than I thought it would be, not so slow as they show it in the TV, and pretty much a normal theather play, but with Japanese "jokes", and dances. After that we just scroll around, not really knowing where to go. End up going to a Cafe, then entered this small Rice museum they had, with a nice display of pics in a room in the middle where we chat for a while, before going to have dinner at Bagel&Bagel (one of my favorite shops as well... cause, well they have Bagels! :p), and they had vegetarian sandwich! yeah! with chick-peas cream (humus), really nice, and Jane had brought some Vegemite (an Australian spread) that she wanted me to try, and even brought a small jar for me! thanks! she told me many people didnt like it, but its not that bad... its better than natto anyway, and I can eat natto already, so. 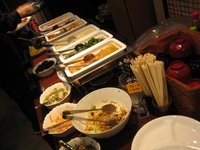 It was such a great day, we talked about so many things, from simple things, up to global warming, people, being veg, free hugs, people disconnection to each other and to earth, Japan, commerce, life experiences, it was just amazing how much I could talk with someone I just met. Probably so much more than I have talked with people I have know for many years. And just felt so comfortable talking to her, sharing thoughs, experiences, and even secrets... It made me feel so relaxed, and happy at the end of the day. I hope I can meet her again when she comes back to Tokyo, before going back to Australia.

... my fingers are getting tired... so I think I will just write about my weekend shortly... 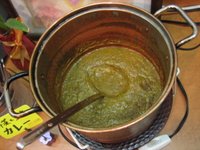 On Saturday, after remembering the night before that I had "baito" (part-time work), I woke up, and under the rain ride to the school where I'm working as a tutor in a science experiment class for kids.
After finishing there at 12' I headed to Kinshicho to meet Madoka and Andrew, to have lunch at "It's Vegetable" (again! :p), who wanted to try it after hearing about it on Thursday night. We had a really nice lunch, chatting with the owners (a really nice couple who already know me :p) and a Chinese lady sitting beside us. After Lunch we went walking around a shopping center, playing with the furniture, kids clothes, accesories, toys, etc... at different stores. :D that's what I love about shopping centers when having good company, that you can just go around "window shopping", having fun, laughing, chatting, with no need to spend your money, or hearing people screaming "iraccccchaiimasseeeeee!!!!!" everytime you enter somewhere. ;)
Something I also realized last week as well when I went to Lalaport in Toyosu with Johana and Javier, after the Colombian Christmas party, and we where trying to explain Javier what we ment when we said there is not many shopping centers here in Japan.

On Sunday! yeah! free hugs again :p (more on that later... I just have to say it was a really incredible, amazing, and happy day)
so... here it goes: We met around 12 with Arina (a girl who we had hug the first day we went out giving free-hugs, and who decided to try it with some friends), her friends, and two other guys who had joined. And then we met with Tomoko and Tatsuya (my free-hugger fellow friends :p they are so nice, I am really happy I met them!), and we went around Yoyogi park, first hugging a young woman with her child who told us she had seen the video, then we hug a group of Japanese people who were eating and drinking in the grass, and who were ashame to hug us at the beginning but after we hug them they were so happy and hugging each other! :p
We went after that to a flea market that was being held in the park, so there was lots of people, and though most just looked at us with strange eyes, there was quite a few people who came closer for a hug! and there was this man who stayed for sometime taking pics, and talking to us.

Then we went to Harajuku, which is probably the perfect spot for free-hugging (at least in the quantity level), because most foreigners will come here to take pics of the crazy dressing people (who I've realized are so nice people as well!). So there we hugged with a lot of foreigners, japanese young people who doubt before hugging us, this human-statue guy also came for a hug in his break :p, and we end up being around 20 persons giving out free-hugs. There was even a group of four japanese dressed up who had "free hugs" written in their hands (see the pic) who joined us, they were so funny!
There was also this lady who saw us, and was so touched that she started crying while she was hugging us... it was really touching, she just kept saying "ganbatte! ganbatte!". Now, that i think about it, I should have tried to talk to her, actually I asked her if she wanted to talk, but she just said thank you, and "ganbatte"... It is so nice to know that there is people that really feel moved by this kind of free acts of love, peace and connection.