After an amusing hiking around Tokyo on Saturday, Sunday couldn't stay behind!
Definitely not when I had friend's company, veggie food, many things to see, free hugs to receive and more friends to meet! and many other great things!

I met with Erika (a new foreign student from USA (with Japanese parents) who is veggie - it seems weird to write about someone knowing that the person will read it... ハローエリカ！:p) at kinshicho, for lunch at "It's vegetable", a really nice and delicious Taiwanese vegan restaurant I really enjoy recommending to everyone I know :). After lunch we decided to go to Earth Garden, and so we headed to Harajuku station.
As every Sunday, the first thing you see in Harajuku (other than lots of people) is (lots of) funny and crazy dressing people... but this time there was more people than usual, and I was feeling more like a curious tourist than someone living in Japan, so it was really fun to look at all the crazy people, taking them pics, and actually taking pics together. Its funny how shy they can be when you actually try to talk to them... :p 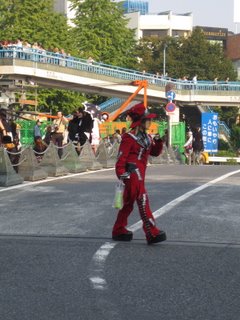 Before heading to Yoyogi Park (where the Earth Garden was being held) we entered Meiji Shrine, a place I really like in Tokyo because of all the trees, the quietness, the sound of birds, and the feeling of traditional Japanese culture... which this time included a wedding ceremony, another ceremony inside the shrine, many flowers and gifts from different places around Japan, and kids wearing Kimono.

on our way to Yoyogi Park we saw the famous Elvis' dancers, who meet every weekend to dance...

we also saw some of the street musicians, and a crazy super star... :s?

When we got to Earth Garden (an event like Earth Day to promote ecological, organic, compassionate lifestyle), I had a really nice surprise!!! Just when I saw the "Free Hugs" sign, I didnt need to think it even once, before going to hug them!!! I was so happy!
I had actually show the video to many friends, and I had ask a Japanese friend how could you say "free hugs" in Japanese (not finding a good translation), and had actually spoken with a friend of how much we wanted to try doing it in Japan (not really sure about how Japanese people would react...), so seeing Japanese doing it was the best!!! and now I will definitely join them some day to hug people and brighten up someone's day! Thanks Juan Mann for starting this! and all you people for being out there!

Events like Earth Day, Earth Garden, and all this are really really great, it is so nice to feel surrounded by people who share your way of thinking, meetings friends, seeing how little by little more and more people decide to live a compassionate and ecological life, is really great! there is still many things to learn, and many things to do...
After going around the festival, talking to some of the people, buying some veggie curry, and eggless mayonnaise, enjoying the atmosphere, it was time to go to meet with my friends from Osaka at Shinjuku. But before taking the train... one last pic with the Pokemon (Pikachu) girls! :p
Thanks Erika for a great day! you may probably think I'm crazy hugging strange people and all... jaja :D

some random pictures at Shinjuku station, there is too too many people!!!

At Shinjuku I met Bihong, Stephanie and Kim, for a nice chat under the sky outside Starbucks... it is always so nice to meet friends, who even when we cannot meet often, after having spent one year together are pretty much my family here in Japan! and then after Fanny went, Sue joined us, and we had dinner before Bihong and Sue went back to Osaka... hope to see you guys soon! (at my place... jaja :p) and dont forget about Karaoke... Kim and Fanny!